Serving Others with Humility and Grace 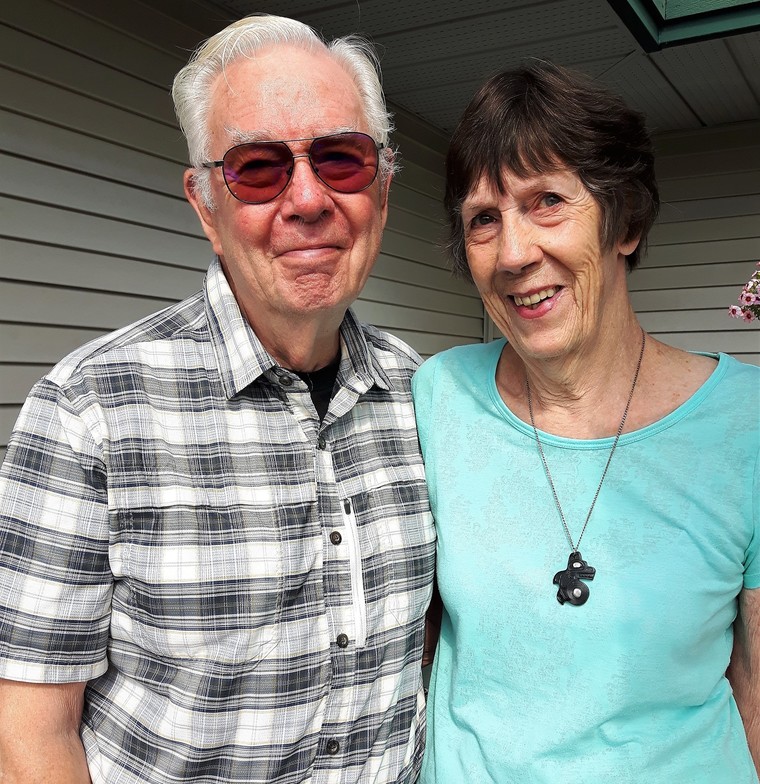 Jack and Sheila Carlson have had strong ties to the Sunshine Coast for many years. Sheila’s great aunt had property in Roberts Creek, and Sheila has spent time on the Coast since her birth. When Sheila met Jack and brought him to visit, Jack also fell in love with the area.

After they married, Sheila and Jack continued to visit with their two daughters, Valerie and Sandra. They felt fortunate to buy their own piece of property in Roberts Creek in 1983. In 1988, Sheila was experiencing some health issues and was advised to retire from her long-time position with Hudson’s Bay. Jack, who was a skilled computer analyst and spoke Japanese, was offered a job with Howe Sound Pulp and Paper as the mill transitioned into their partnership with Oji Paper. As a result, Jack and Sheila were able to move to the Sunshine Coast on a permanent basis.

Jack and Sheila’s affection for their community has had a big impact in many ways. They are long time volunteers and have served many community organizations over the decades. They live by a few simple words: “we give where we live” (a TELUS Community Ambassador slogan of which they are both current Board members and volunteers). They believe that giving is a good thing to do. And Jack and Sheila have done that through their actions as well as their financial gifts.

Sheila served on the Sunshine Coast Community Foundation’s grant committee for the maximum three terms, a nine-year commitment. It was during this time Jack and Sheila realized that more needed to be done to close the funding gap experienced by many good causes. It was in 2009 when their elder daughter, Valerie, received a terminal cancer diagnosis. She was only 47 years old with three teenage children at home. Even though Valerie approached her situation with a positive mindset, she survived only five months before passing away in the hospital. Although Valerie received excellent care and the hospital staff did everything they could to make Valerie comfortable, her last days were difficult and painful.

The pain and suffering continued for Jack and Sheila, who were now grieving the loss of a beloved daughter. Tragedy struck again too soon. In 2010, Sheila’s sister Kathie, who lived in Roberts Creek, also received a terminal cancer diagnosis, following her seven-year battle. Kathie spent her final days in palliative care where she was supported to the end of her life. When Jack and Sheila witnessed how hospice specialized in easing the pain, discomfort, and distress that Kathie experienced, and how her physical, emotional, and spiritual needs were taken care of, they knew they had found the organization that they wanted to support. Kathie’s experience of high-quality end-of-life care solidified Sheila and Jack’s desire to provide financial support to this important community organization. They established the Jack and Sheila Carlson Family Endowment in 2013 to honour Valerie and to support the Sunshine Coast Hospice Society.

Jack and Sheila know first-hand, “how lucky we are to have a facility like Sunshine Coast Hospice to ease death and suffering.”  And they feel strongly about their community and the Foundation. “Giving of yourself and keeping money on the Coast to benefit our community is rewarding in so many different ways.” Jack and Sheila note that “we knew we were partnering with an organization with a wonderful reputation and engaged in our community. Establishing and growing an endowment with the Sunshine Coast Community Foundation gives us more bang for our buck and enables the Foundation to make a generous annual gift to Hospice in perpetuity”.

Anyone may make a gift to the Carlson's endowment in support of the Hospice Society. To find out more about making a gift or about starting an endowment in memory of someone you love or to support a cause you care about, contact the Foundation.