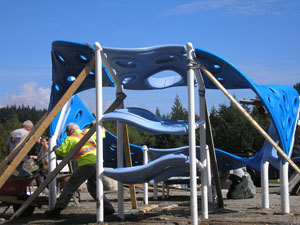 Take one illustrious green space, mix in an enthusiastic neighbourhood with creative ideas, bundle this with a generous community, add some incredibly hardworking citizens and you have the Shirley Macey Park Project. Located on Chamberlin Road in Gibsons, Shirley Macey Park is part of Soames Hill Regional Park, which opened in 1997. In 2000, 14 hectares were renamed. Shirley Macey had been a long-time Gibsons resident and a member of the Gibsons Advisory Planning Commission when Soames Hill Regional Park was established.

The ambitious project all began with a wish by the nearby community for a children’s playground. Enter Sheila Cameron, a busy mother of two who, in August 2007 approached the Sunshine Coast Regional District (SCRD) for assistance in constructing a play area. While the SCRD supported the idea, they didn’t have the budget. This put Sheila into motion, applying for grants, fundraising throughout the community and along the way meeting Larissa Hsia Wilcock who became her partner in the quest to improve the park. From this point in early 2008 the plans snowballed. Larissa, also a mother of two small children and an artist, came up with a plan to incorporate nature, art and a water feature into the park.

“We have been overwhelmed with the generosity of this community,” states Sheila who has even gone door-to-door soliciting. Funds have been received funds from a variety of local businesses as well as a large grant from Ronald McDonald House Charities. Thanks to a Let’s Play grant — a partnership between the province of BC and the Rick Hansen Foundation — the new playground and trails are wheelchair accessible. Members of the community have arrived to help with labour and Sheila says they have worked closely with the SCRD.

The Sunshine Coast Community Foundation donated $1,500 towards the new frog habitat. Yet another goal of the motivated group working on this park project was to create an educational frog habitat. Says Sheila Cameron: “As well as supporting the frog population, we see it as a tool to foster awareness and respect for animals in our children.” The area includes a raised, wheelchair-accessible viewing deck and bilingual signs to identify frog species.

“Assisting the community in the creation of an education frog habitat at Shirley Macey Park was a natural for us., ” Says Peter Bogardus chairman of the Sunshine Coast Community Foundation Board. “One of the Foundation’s goals is to enrich life on the Sunshine Coast.”